I designed this wine rack for my parents. It holds four bottles of wine (two on top, two on bottom). I got the wood from a dead cherry tree that I cut down right behind my house. My dad helped me mill the tree into boards and then plane it. I tried to be more creative with this project, adding curved cuts thoughout. January-July 2015. 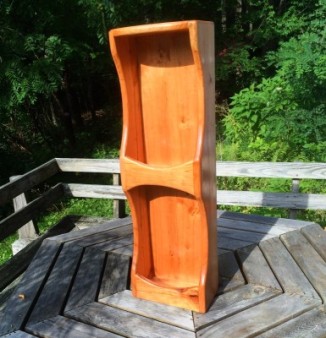 I recently cut down a maple tree for firewood, and decided to make a bowl out of the base of the tree. This is one of the largest bowls that I’ve tried to make, and also perhaps the thinnest. Click on the photo for details. 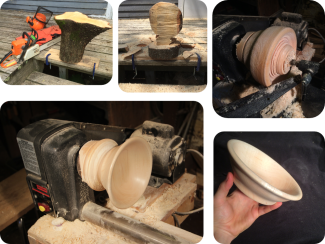 The coop stands on four 4×4 posts, each of which is in a two foot deep hole. Here we are starting to frame in the floor. The boards above my head are temporary – used to keep the posts from shifting until the walls are in place.

In this photo you can see the area around the chicken coop: an old barn to the left (mostly covered in trees), blackberry bushes and concord grape vines to the immediate right, and a fenced in garden to the far right. 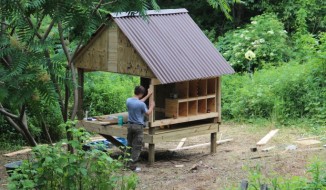 My dad is putting in the wall with the nest boxes in it. It took some clever planning, but the nest boxes were all cut out of a single sheet of plywood.

There is a trapdoor (which we usually leave open) to allow the chickens to get under the coop. My dad is installing a small door and some wire mesh to keep the chickens in and the predators out. Notice that the back wall is on a hinge – this is really helpful when we need to clean out the coop.

Nest box doors! The chickens climb into the nest boxes from inside of the coop, but these doors let us easily collect the eggs from the outside.

Finished coop with the doors closed.

Finished coop with the doors open. 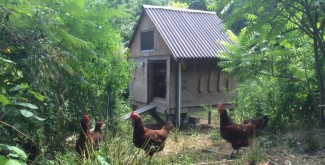 Now we have 12 chickens, mostly Rhode Island Reds At most we’ve had 32 chickens, from a variety of breeds, including Ameraucana , Barred Plymouth Rocks, and White Leghorns. 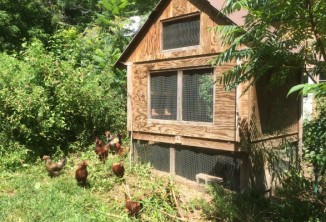 Much of the foliage has grown back in around the coop now, and the chickens make paths through the grass and under the grape vines. There is a fenced in chicken run that is about 50′ by 150′ around the coop.

A time-lapse video that my dad made during the construction of the coop.

A tour of the chicken coop, taken in July of 2015, four years after construction.

I designed this bookshelf to be an extension to my desk. Most of the shelf is made of pine, but the writing surface that sticks out is made of three joined oak boards. 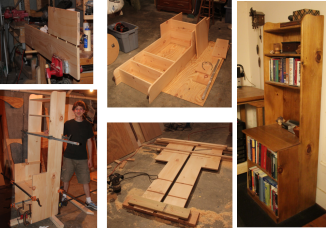 Shortly after starting grad school at Cornell, I ran across a book on fractals and chaos and decided that I would write a program to compute the Mandelbrot set. I wrote a few different versions in Matlab, which I used to generate the plots below (using GIMP to add color). I later wrote an interactive version in Java, to make it easier to change the view of the fractal. 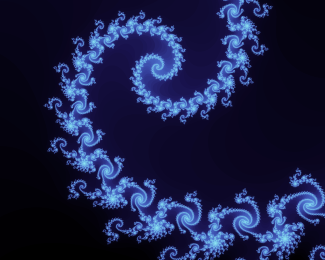 Another neat fractal is the driven-damped pendulum. This one is neat because it corresponds to a physical system: a swinging pendulum (with some damping) that is connected to a motor (generating a time-periodic torque). Given any initial state, the pendulum will eventually reach some basin of attraction and stay there. In other words, when the pendulum starts, it can flip over the top, but eventually it loses so much energy that it can only sway back and forth. The neat thing is that two initial states that start nearby do not necessarily (or even usually) end up in the same potential well. One might flip over the top three times, while the state right next to it will flip nine times. This plot shows the set of all initial states the converge to the same potential well.

I have a few more high-resolution images of the fractals in a folder on Dropbox:

My friend borrowed his Dad’s backhoe to dig the foundation (12 feet deep), and then manuever the two vertical supports into the hole. Each support is a 22 foot long oak log, which are connected underground with a truss.

Next came the construction of the counter-weight. It weighs approximately about a ton, and is a plywood box, filled with rocks, rebar, and concrete. Large bolts and rebar were embedded in the concrete to keep the counter-weight firmly attached to the arm. 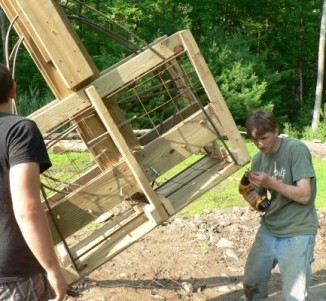 As a final step, we attached the last section of the arm. Originally, we used a nested set of PVC pipes, but they were too flexible. Later we replaced them with an oak sapling, which worked much better. We pull-down the trebuchet using a set of pulleys that are connect to an electric winch that is off in the woods to the side of the trebuchet. The firing mechanism is a long string that is connected to big lever. Pulling the string causes the lever to fall under its own weight. As the lever nears the ground, it pulls the firing pin. This system allows the operators to be far from the trebuchet when it fires.

One night we set up the trebuchet to fire a gallon jug of water, in which we placed two small LED flashlights (themselves inside of a plastic bag). Using two cameras set on long-exposures, we managed to capture images of the trajectory that the projectile makes.

After four years of music theory classes, I finally got around to composing some music of my own. These were both written (and performed) in 2009 while I was at Tufts university.

I built this table over winter break in my junior year of undergrad, to use as a desk in my off-campus house at Tufts. The top surface is made of seven boards joined on the edges, with a border around that. The legs are removable. I recently converted the table into a standing desk, as shown in the photo below.